The History of Sex: Part 15

Posted on: April 26th, 2012 by Madison Lake No Comments
Posted in blog, The History of Sex 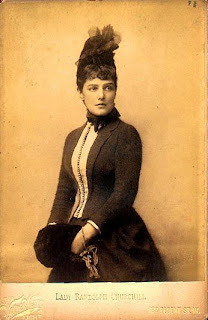 A non-fictional contemporary of Edith Hornbrook would have been Lady Randolph Churchill, mother to future Prime Minister Winston, total cougar, and all around sassy broad.

Jennie Jerome was born in 1854 into wealthy and socially connected New York family.  Legend has it that her father named her after his favorite mistress, Swedish opera star Jenny Lind.  Jennie’s mother took her daughters to Europe to husband-hunt, a very popular activity for nice American heiresses.  It was in England that Jennie met Lord Randolph Churchill, younger son of the Duke of Marlborough at a yachting party and apparently, it was love at first sight.  Randolph’s parents were not thrilled about their son marrying an American and tried to forbid the couple from seeing each other.  Clearly, they were not successful as Jennie and Randolph did marry AND their son Winston was born less than 8 months after the wedding.

Lord Randolph was a mediocre politician who got ahead thanks to Jennie’s tireless work, both social and in the bedroom.  She had an affair with the future Edward VII AND remained good friends with his wife, the future Queen Alexandra.  She also fooled around with Otto von Bismark’s son and with heaps of other aristocrats.  Through her efforts, her husband was able to be Secretary of State for India and Leader of the House of Commons.  However, he also played fast and loose with his marriage vows and died of syphilis in 1895.

After her widowhood, Lady Randolph became even more bold.  Jennie worked hard to promote the career of her eldest son and cashed in many favors to get him started.  She went down to South Africa to nurse soldiers during the Boer War and in 1900, she married George Cornwallis-West, an officer who was only 16 days older than Jennie’s son Winston.  They were married for 12 years before they divorced.  Jennie’s next husband was Montagu Phippen-Porch, a civil servant who was 23 years younger than her.

They were happily married for three years before a freak accident caused Jennie’s death.  She was walking down stairs in a new pair of high heels and tripped.  She broke her ankle, the wound became infected with gangrene and she died from complications from the amputation surgery.  A cautionary tale in the age of the Brian Atwood pump.

Wednesday’s Photo of the Day

Posted on: April 26th, 2012 by Madison Lake No Comments
Posted in blog, photography

photo of the day, please email your formatted shot

to madlakepages@gmail.com with the pertinent

Let’s start the week on a positive note…

A 50 word flash fiction story with 5 words taken from Thursday’s The History of Sex: Part 14.

She had gotten used to the scrutiny, both public and behind her back. She didn’t care. With the bevy of young lovers at her beck and call people could say what they wished, but she knew they wished for what she had – the Wilde life.

If you’d like to participate in FF Friday, please send your 50 word story with 5 words taken from a Thursday post. Email your story to madlakepages@gmail.com. Don’t be shy. Just do it.

Enter your email below to signup for Madison Lake's bimonthly e-newsletter to receive the latest scoop.